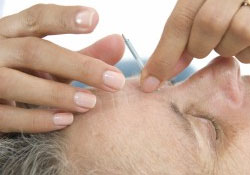 When I was going through medical training I went on a month-long journey to Central China and Tibet with a group of fellow students and Qi Gong enthusiasts. We traveled to many remote monasteries where we studied the philosophy of Taoism and practiced six hours a day of Qi Gong. It was pure heaven for me.

I came back from that trip knowing that I had to study this form of medicine. I had already fallen in love with the wisdom of the philosophy from the Chinese Medicine courses required for my Naturopathic Doctor program. That’s what got me on the trip in the first place. But I had no idea that I would actually enroll in the formal Masters program. I mean, who does a doctoral program and a masters program at the same time? Crazy, right?

At some point after I officially enrolled it dawned on me that I should probably get some acupuncture treatments myself. I mean, if I’m going to be an acupuncturist I should probably have some first hand knowledge of the experience. My only excuse for not having already crossed that threshold is I’d been pretty bless with good health. So I just didn’t seek out alternative medicine treatments for myself.

Dr Wu, my teacher and the Chinese doctor who gave me my first treatment, said I had liver qi stagnation. Typical Chinese style acupuncture is notorious for strong needling (aka painful) and this was no exception. I got a total of 5 sessions with Dr Wu and every time he needled that Liver point I wanted to sit up and punch him. Not because it was all that painful; it wasn’t and it only lasted a few seconds. It was like a flash of rage surged through me that lasted about 2 seconds. It was shocking. I actually liked and respected my teacher. I really didn’t want to punch him. But there it was, an image of me sitting up and punching him that flashed through my brain. As it turned out that was a normal response to stuck emotion being release. And, as it turned out, it was quite therapeutic.

It seems that maybe I did have some issues that I could use some help with. I had learned to live with symptoms that I thought were normal for me. After those initial treatments my digestion improved, my PMS symptoms disappeared, and I felt much more calm and balanced.

That’s how it works. By creating balance. Throughout your whole system: body, mind, and spirit. Years later I’ve treated many people with acupuncture and I never cease to be amazed at the gentle yet effective way it works. It’s so relaxing and even euphoric during the treatment and then, after just a few sessions usually, things just start working better.

I would love to help you feel well again too.